Review of the Voyager Tarot
By Kooch Daniels

When someone gave me the James Wanless Voyager Tarot, as a birthday gift, I was happily surprised to receive a modern, truly unique deck filled with vibrant collage images.  Initially, I had no idea that James had harnessed the spirit of the tarot to inspire oracular visions that would come to light on my divination table.
Not only did his multicultural cards that are crafted for “Fortune Creation” instead of “Fortune Telling” have a positive effect on me, but they also visibly inspired the many people who sat across from me at my reading table who looked at their colorful images.   Because of their upbeat quality, his deck, like the Delphi flame, could inspire people to easily open up and share emotions.  Shortly after I began doing readings with this original deck, and noticing that it deeply affected people, I became addicted to using it.  Even after more than two decades of using it to give readings, it is still one of my most trusted decks to most assuredly invoke a positive response from the uninitiated viewer.
These cards follow the structure of the long-established tarot format, but some new ideas are presented, especially in relation to the minor arcana suit that represents the element air.  Obviously James must feel a personal connection with the magic of crystals, as he has used crystals to represent the lesser trump that is traditionally symbolized by the swords. Most people love crystals, know something about their healing properties and feel hopeful when they are looking at them.  During readings, when someone views the crystals, an affirming response is often summoned in response to questions being asked.  It’s not that I’m lazy, but while working, I don’t miss needing to discuss why a sword has many meanings and that they don’t have to be viewed as a weapon or in a severing manner.
The Voyager Tarot makes it easy to understand why James Wanless is considered a leader in the tarot community, and “a visionary, educator, artist, new thought leader”.    If you love playing with the cards and your intention is to see behind the veil, don’t miss the benefit of working with these magical cards. 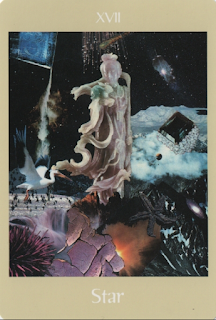